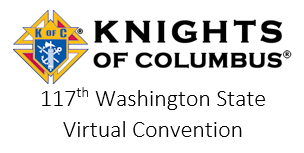 The 117th Washington State Convention was held over the phone this year due to the circumstances of social distancing.

Delegates received a phone call before 1pm and joined the line with over 100 other Knights including our State officers.

To start off there was a pre-recorded message from Supreme Knight Carl Anderson concerning Knights in the time of coronavirus. Also mentioned were the new Exemplification procedures, and that thousands of new members came in through online ceremonials. He finished by noting that this year marks the centenary of the first K of C delegation to Rome, where Pope Benedict XV was visited in 1920.

Deputy Supreme Knight Patrick Kelly spoke of the order’s charitable efforts, noting that Washington donated 1.7 million dollars to charity and was honored with the 2019 Community Champion Award for working with Special Olympics. During his reading of exemplary council efforts across the State, Burien was mentioned, highlighting the pregnancy aid program and the donations collected this year.

There was a message from the insurance agency that everything is operational and most of their activities are being conducted via Skype.

Chaplain Kenneth St. Hilaire offered prayer and spoke of the need for Catholic evangelization, exhorting all to proclaim the Gospel.

State Secretary Kim Washburn reviewed lists for credentials. In attendance were 6 State officers, 1 immediate Past State Deputy and 100 delegates/hosts, for a total of 107. The 2019 minutes were approved with no correction. Report of committees was accepted and included in minutes.

Around 2pm we moved on to elections, all State positions were announced unopposed and renewed for 2021. Delegates to the national convention were selected by votes over the phone.

The resolutions committee reported, numbers 1 through 9 were read abbreviated for time constraints and were unanimously accepted. Resolutions 10 through 14 were read in greater detail. 10 was withdrawn, 11 was not subject to amendment at State level, 12 was rejected, 13 and 14 were no action taken.

There was no new business. The Columbia Charities minutes were approved and Past State Deputy Eddie Parazoo was the sole nomination for Director. The minutes for Pennies for Heaven were approved.

Closing prayer was offered by Chaplain St. Hilaire and the convention adjourned at 2:38pm.